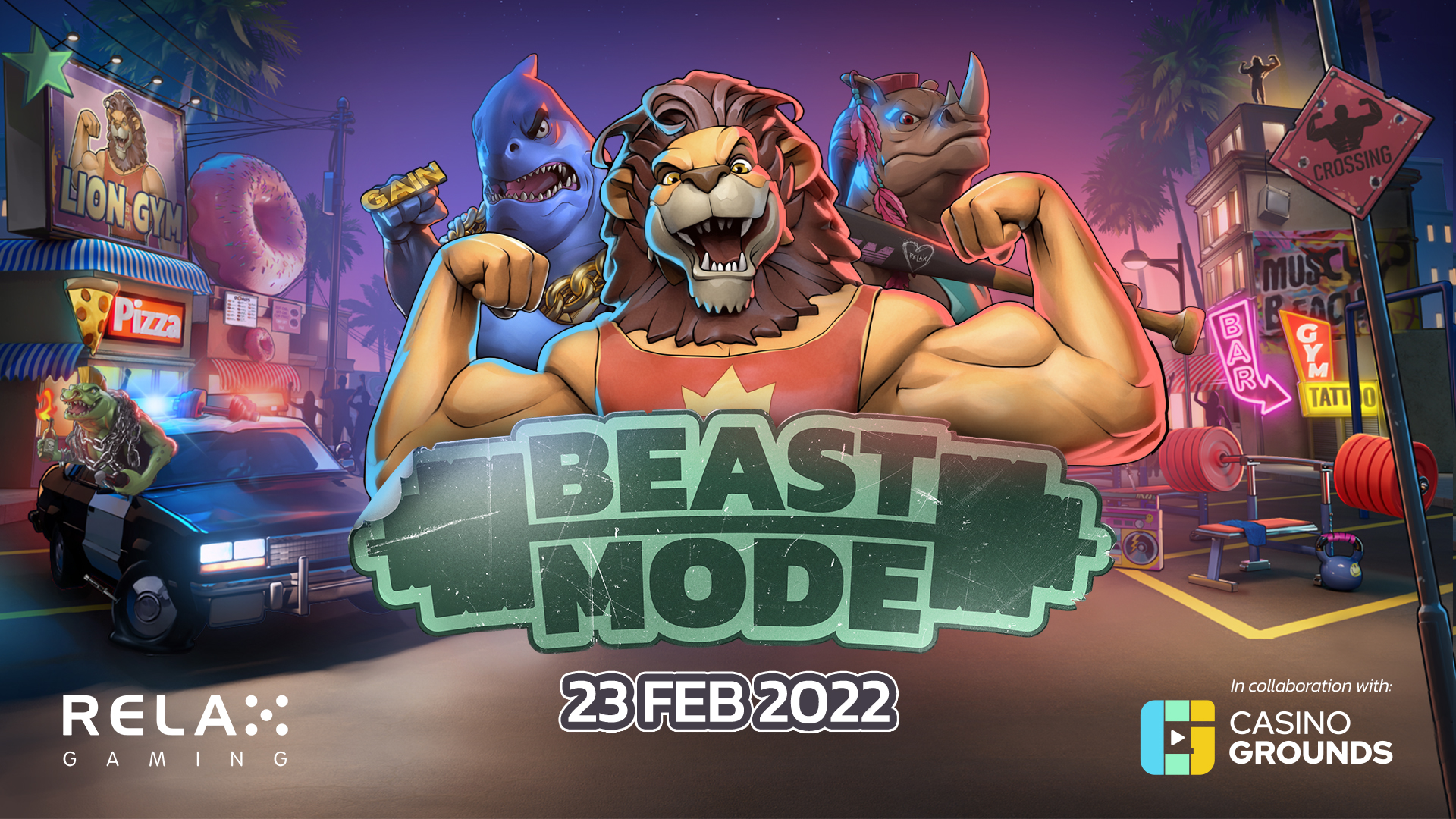 23 February 2022 – Relax Gaming, the igaming aggregator and supplier of unique content, is inviting players to take a walk on the wild side in its buffest title to date, Beast Mode.

This high volatility eighties-inspired slot, developed in collaboration with CasinoGrounds, sees players transported to Venice Beach where the tank-tops are tight and the wins are even bigger than the oiled-up muscles.

This feature-filled title includes a Random Mystery Spin feature that sees mystery symbols land randomly at any time and three unique free spin features that pits players up against three beastly thugs. These are Mystery Symbol free spins, Multiplier Ladder free spins and Expanding Wild free spins, all of which can lead to players netting a maximum prize of 25,000x their stake.

The Mystery Symbol feature awards players six free spins with persistent mystery symbols present, these symbols reveal the matching symbols upon landing. An expanding bomb symbol can also land which will explode and force the height of the game reels to expand.

The Multiplier Ladder feature awards players 8 free spins with a x1 multiplier. After every win and between spins the multiplier will increase according to the multiplier ladder visible above the reels up to a maximum of 500x. At certain steps in the ladder extra spins are also awarded.

The third and final free spin bonus, the Expanding Wild feature awards players with seven free spins in which wild symbols expand downwards whenever they appear, increasing an overall win multiplier by 1x for every wild that lands on the reels.

Whenever players trigger the free spins bonus they can choose to utilise a heart-stopping gamble feature, this sees them spin a wheel of fortune that decides whether they’ll receive a better bonus with additional perks or lose it altogether.

If players wish to jump straight into the action skipping base gameplay and into the free spins bonus, they can do so by paying 80x their stake, triggering it instantly.

Simon Hammon, Relax Gaming CPO, said: “When we worked with CasinoGrounds on the development of Iron Bank last year it proved to be a huge success and fans absolutely loved it, which hardly came as a surprise considering that it’s a community-led game.

“Doing it all over again was always going to be on the cards, and Beast Mode is what’s come out of this exciting collaboration. We really can’t wait to see how players take to this slot, which is easily among the strongest we’ve ever created!”

Now one of the industry’s leading aggregators, Relax provides more than 3,000 online casino games, from its high performing proprietary slots to a significant, varied library of content from hand-picked third-party studios via its partnership programmes.